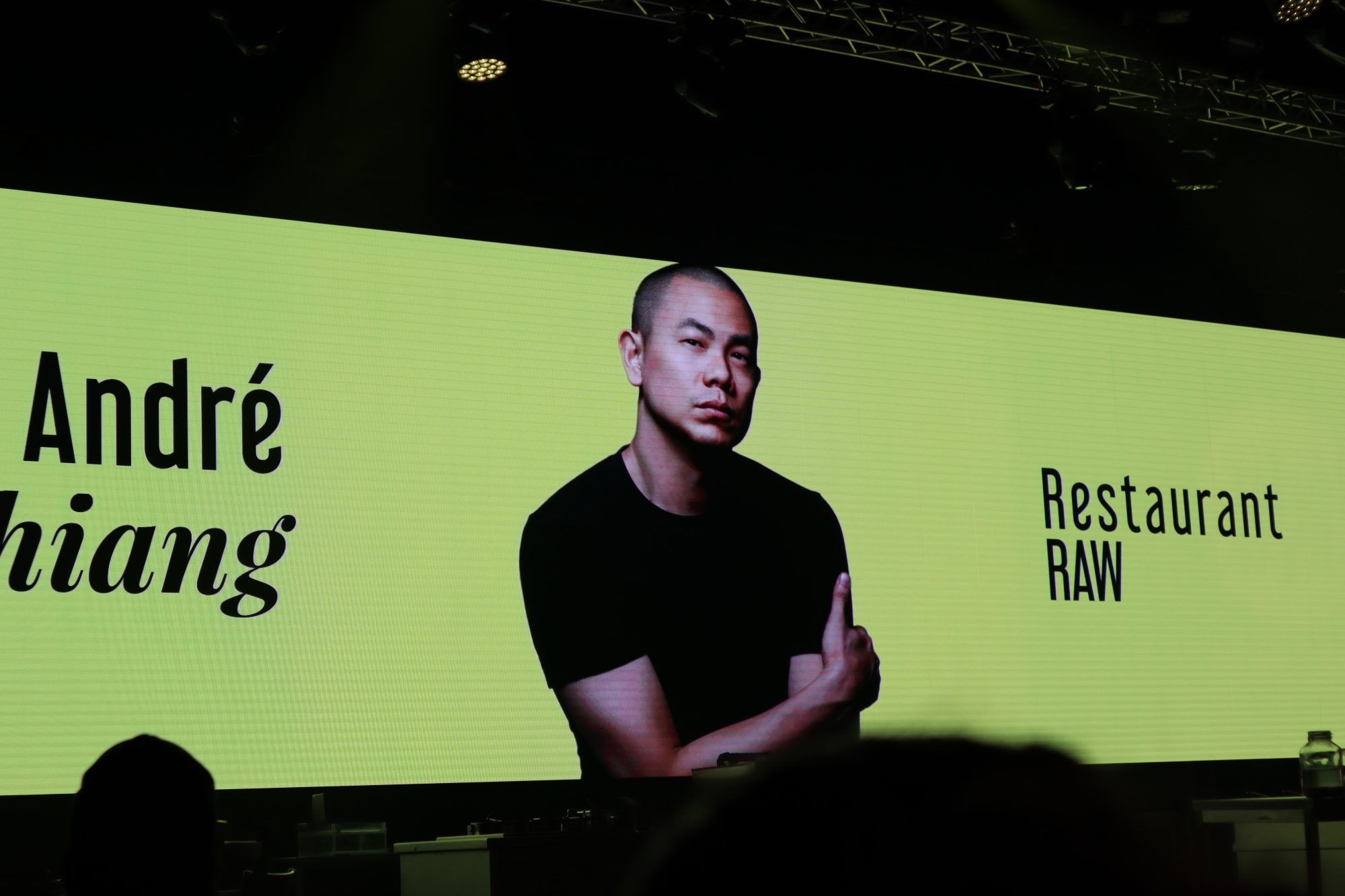 We attend the Chef Days 2018 in Berlin, known as the biggest and most important international culinary event in Germany. 25 chefs were there to present and discuss their news and ideas about cuisine. Among the 25 creative chefs: 14 of them were German, 10 came from Europe and only on chef was Asian among the selection. André Chiang is the famous chef behind  the RAW restaurant in Taipei, his hometown.

Chiang never ceased his steps to pursue perfection. His restaurant ‘s menu centers around his ‘Octaphilosophy‘ taking into account Chiang’s eight elements of gastronomy: salt, texture, memory, pure, terroir, south, artisan and uniqueness. RAW was honored with a ranking second place on Asia’s 50 best restaurants list and got awarded by Michelin star by the RedGuide. The menu often changes and lunch and dinner are completely different. What a gastronomic performance !

Chiang began his cooking career at the age of 13 and celebrated his 30th anniversary in the kitchen last fall. This symbolic anniversary made Chiang willing to return to his native city, Taipei.

Now he devotes his full time RAW and is also the co-founder of five restaurants in Singapore, Paris and China.

At RAW, André Chiang is the brain and eye and the chef Alain Huang is the second. Together they are the solid pillars of this restaurant already famous worldwide. They  use 3 symbolic elements to define what is Taiwan flavor and work with the tastes of “umami” , the precious “black bone chicken” and a fresh made “white tofu”.

Umami taste is also known as the 7th taste and is described as a savory taste. Discovered by the Japanese scientist Kikunae Ikeda in 1908, it plays an important role in the Asian cuisine history. Chiang and Huang are only using traditionally local Asian ingredients and created  a “Black Umami Ketchup” made of a special meaty flavor. This delicate savory sauce contains  dried shiitake, dried anchovy, cured ham, dried squid and black bean. Cooked for hours in a  in a stew, Chiang and Huang’ incredible stock illustrate at perfection the basic chord for Taiwan flavor! 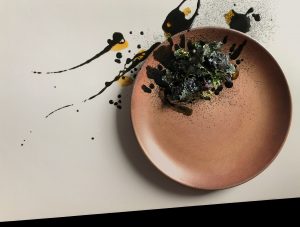 Even Though their  umami ketchup is very  a solid culinary base, the black bone chicken on the menu is definitely another leading character and got an international recognition and  admiration. This rare specie of chicken can be found in Asia. The bird has white feathers but its flesh is purely black: from beak to claw, from the outside of the skin to the inner muscle and veins. Its unusual look make ancient Chinese people believe it to have special medicine powers that will  enhance their daily strength. Some people still look at the black bone chicken cuisine as “dirty” and say it looks just like a shadow in a plate. Huang has done many experiments with a lot of different chickens before choosing the black meat one. From famous French Bresse Poultry to Asian species, the black bone chicken was the most suitable meat to serve with his umami ketchup. Its elasticity, its firm meat and flavor go so well together. 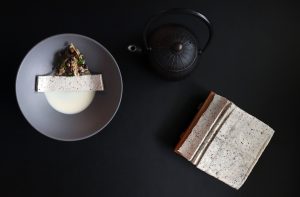 Tofu is a  daily common food for every Taiwanese family. In Chiang’s hometown, chefs go to local markets to buy freshly made tofu every day and people are always enchanted by its fresh smell and soft texture. Taiwanese even ferment tofu to make matured bean curd and serve them as pickled food. Chiang said, “Tofu in Taiwan is as cheese in Europe, they are all made by protein material, and condense by minerals or enzyme”, Chiang and Huang really want to share this local Taiwan flavor to their gourmet clients. Moreover, they creatively added truffle to it : “autumn is the season for fungi, truffle’s fragrant and its texture match fresh made tofu most ” Huang explained. The two cooking magicians reached to make it a  liquid solid. By adding bitter sea salt from Taiwan into the veggie milk withsome pressure on top, the warm soy milk condense gradually in the woody mold and start to look like tofu.

New made tofu is warm and soft, trembling in chef’s hands as glowy jelly. Veggie fragrance from soy and truffle allured all the audience and call for success. RAW tends to use every part of the ingredients from all products and at each stage of the culinary procedures. They collect the “soy whey” from making tofu, seasoned it, made it into broth for the truffle tofu itself. We can call It the nirvana of soy cuisine.

The Philosophy of Minimizing the Food Waste

FKM was very impressed by the RAW philosophy. They tried to utilize every ingredients as much as possible. It is known by the gastronomes that RAW is the one with best place to avoid  food waste in the kitchen. Chiang said, “people often think that fine dining means high percentage of food waste, because a beautiful garnishing plate seems to use only a small portion of food ”, “People throw food away because they don’t know how to use it all. As professional chefs, Huang and Chiang devote their career  to develop knowledge about every part of food and how people can use them until the end.” 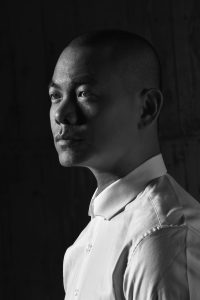 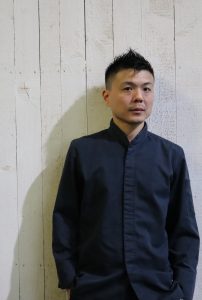